Scottsdale Golf Course Playing conditions are of the utmost importance for most golfers, and aeration is needed to keep turf healthy and playing well.  Aeration can be disruptive, but the long-term benefits of aeration far outweigh the short-lived disruption.  The next time you play on Scottsdale Golf Course greens that were recently aerated, keep in mind that aeration is performed for the long-term health of the course.  The greens may not play their best immediately following some aeration treatments, but everyone is playing in the same conditions, and golfers still can enjoy the game and make plenty of putts.

The word aeration stimulates negative emotions for many golfers. It may come as a surprise, but golf course superintendents also dislike aeration.  After all, the last person who wants to disrupt the smoothness of the putting greens they work so hard to maintain is the superintendent.

Core aeration involves physically removing small soil cores from the turf and is the most common type of aeration. Aeration hold allows excess moisture to evaporate and promote gas exchange in the soil, resulting in stronger root systems and turf that is better able to tolerate golfer traffic.

Proper timing of aeration will ensure the fastest possible recovery and return to smooth surface conditions. The key to a quick recovery is to perform aeration when the turf is healthy and actively growing at Scottsdale Golf Club.  There are many types of aeration that superintendents use throughout the season; some are more labor-intensive and disruptive to playing surfaces than others.  Less-disruptive forms of aeration, including venting aeration with small-diameter, solid tines, also are beneficial because they can alleviate turf stress by promoting oxygen levels in the soil. Aeration programs that have a small impact on a playing surface generally can be performed throughout the season with little or no disruption to play.

Posted by The Country Club at DC Ranch at 8:05 AM No comments:

Few discussions regarding turf grass management on Scottsdale Private Golf Courses get more emotional than discussions on whether or not to overseed with perennial Ryegrass.  However one fact about overseeding is indisputable: overseeding with perennial Ryegrass can, and often does, have an adverse effect on Bermudagrass. Nevertheless, Scottsdale Golf Course at management practices can be implemented that significantly reduce the impact of overseeding on Bermudagrass health.  The most important of those practices is getting rid of the perennial Ryegrass by late spring. One of the troubling trends occurring on golf courses is the increasing practice of Overseeding too early in the fall and keeping the Ryegrass too late in the spring/summer. If Bermudagrass does not have sufficient time to grow during the summer without competition from the Ryegrass the Bermudagrass will decline. This may occur in as little as one year and more often occurs gradually over a period of several years. Why does this happen? A fundamental principle in weed science is that plants compete with one another for four basic resources: 1) Water 2) Nutrients 3) Carbon Dioxide 4) Light. Light is the most crucial of these four for the benefit of the Bermudagrass. In overseeded environments, when Bermudagrass begins to come out of dormancy in spring, perennial Ryegrass growth is at its maximum. As a result, the Ryegrass provides significant shade to the Bermudagrass.

Allowing Ryegrass to grow at  Scottsdale Golf Course into June in the Desert South West limits the Bermudagrass growing season and contributes to poor quality Bermudagrass. By late spring it is time for Bermudagrass to emerge from winter dormancy. Bermudagrass utilizes carbohydrates stored in underground rhizomes to produce new leaves every spring when temperatures in the top four inches of the soil reach about 65 degrees Fahrenheit. Bermudagrass has about three chances to produce new leaves while trying to emerge from under the shade and competition of overseeded grasses before it will strike out and die. If a new leaf is unable to capture sunlight- strike one. This process repeats itself until, you guessed it, strike two and strike three. After strike three the Bermudagrass has spent its entire carbohydrate reserve and when sampling the soil it will reveal the hollow rhizomes.

A proactive management regime at Scottsdale Golf Course is necessary to encourage successful Bermudagrass recovery. Here are the five key components for the Desert South West:

2) Soil moisture management- Dry conditions equal poor Bermudagrass recovery during late spring and early summer. It is critical to prevent areas from becoming chronically dry as it will delay the Bermudagrass transition.

3) Chemical removal- Many courses use a variety of tactics to chemically remove overseeded Ryegrass without injuring the understory Bermudagrass. However, we must not wait until June to employ this strategy because much of the Bermudagrass may have already struck out. This tactic is much more effective when used the end of April through May.

4) Nutrient inputs- Nutrient sources should be applied in coordination with chemically removing overseeded grasses. This will stress Ryegrass during warm daytime temperatures while providing nutrients for emerging Bermudagrass.

5) 100 Days Plus- It would be nice to give Bermudagrass 162 days of growth in the absence of competition from Ryegrass. However, 100-120 days is the guideline courses should keep in mind when planning overseed dates and timing chemical removal of overseeded grasses.  If Ryegrass growth is retained well into June, the ability of Bermudagrass to develop the rhizome growth necessary to recuperate the following year will be severely limited. In other words, maintaining Ryegrass into June could result in a season-ending injury for Bermudagrass.

Growing two grass crops at Scottsdale Private Golf Courses annually is a tenuous situation. Extending the Ryegrass growing season into June at the expense of Bermuda grass health is a season-ending injury.

Posted by The Country Club at DC Ranch at 10:08 AM No comments: 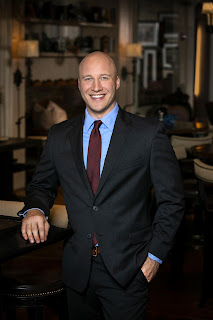 There’s no time to waste, at Scottsdale Private Golf Courses, we must get started right away! The new fitness and wellness program is starting at Scottsdale Golf Course, The Country Club at DC Ranch. Let us teach you how to be fit and healthy for life. Let’s work together for 90 days with the intense focus of getting you healthy, strong, and pain-free so you can play at Scottsdale Private Golf Course.   We have studied around the world gathering and learning the best techniques from master athletes, teachers, practitioners and coaches who have all taught us their various arts in health and fitness and medicine; and now it’s our turn to teach and pass on this knowledge to you. Do you want to be able to move better? Do you want to hit the ball farther? To all who heed the call to get fit, healthy, and to maximize their potential, let’s get started. Our complete 5-Star 90-day program is designed to teach you step by step the fundamentals of exercise, diet, body maintenance, yoga, and meditation all alongside receiving advanced therapeutic and restorative bodywork therapies like massage, stretching, acupuncture, and, cupping which can all be used to improve blood circulation, resolve pain, optimize the nervous system, accelerate recovery, reduce inflammation, and help you sleep better! The question is really, “how healthy do you want to be?” Realize that there are many starting points with one’s health and everyone at Scottsdale Golf Course will have different goals. The first step is always to take inventory! Schedule a fitness assessment. Schedule a health evaluation today. Do you have any pain? How’s your heart tickin’? Do you have old injuries? What sort of traumas or accidents have you been in? What did you eat yesterday? Do you get headaches? Describe your sleep patterns? These are all questions that can help determine the state of one’s health. We must understand that there is no single method that can fix everything, and ideal health doesn’t happen overnight! We must apply everything we know, and we have to forge a lifestyle of healthy living in order for this to work. We may have to combine multiple techniques in order to improve health, and sometimes it might be difficult! Let us help you with your game plan. Can you visualize your best self? Scottsdale Private Golf Courses believe that setting goals in life is so important and will give you direction and it’s the consistency and disciple which will help you see it through, this is the key. We will create and tailor the most relevant program to meet your specific needs. This individualized plan is designed for you to make a rapid return toward ideal health and wellness. All roads lead to where we are going, to the top. Starting a wellness program with  Scottsdale Golf Course means that you must be ready to work on yourself too. To take an honest inventory of your life and to make the necessary changes and adaptations. Our staff is here to work with you as your health and wellness experts, your coaches, and your peer; but in the end, it’s ultimately up to you to take the reins of your own health, and we’re here to coach and teach you how to do that! We want the Country Club at DC Ranch community to thrive! This may be a grueling task and you may need to tap your own inner belly fire to overcome these essential growing pains. But we’re here to fuel these flames and we will be with you by your side the whole way! If you want to accomplish your highest goal you must be very clear within yourself. Start now. State your goals outright. Claw everlastingly towards your best self and never give up. Start learning and teaching yourself about healthy living. Realize there are no limits to how healthy you can be! Think big! Come stop by the Scottsdale Private Golf Courses performance center today and let’s help you get started. If you’re ready to take control of your health and wellness, allow us to be your guide on your way to the top of the mountain!

Posted by The Country Club at DC Ranch at 10:47 AM No comments: