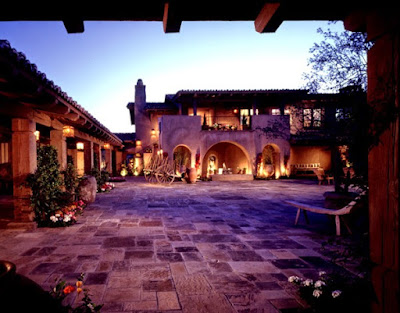 Last month’s weather was very interesting and atypical, especially considering that predictions were for a warmer, drier winter this year. All rain is welcome rain and Scottsdale Private Golf Courses  definitely got our fair share, as did the entire state. Hector Vasquez, a National Weather Service meteorologist in Phoenix, said “the desert rains and high-country snowpack have diminished long-term drought conditions from severe to abnormally dry. However, in order for the drought to be greatly improved, Arizona must receive consistent rainfall over a longer period of time, as well as snow in the mountains, the runoff of which feeds the reservoirs that store Valley water.” Arizona Republic

Posted by The Country Club at DC Ranch at 12:41 PM No comments: 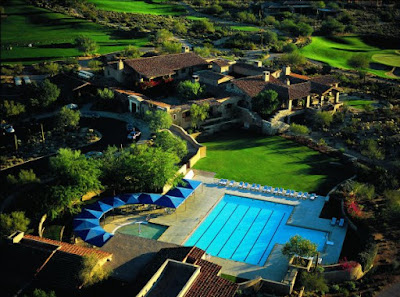 It was wonderful to see so many of you at the  Scottsdale Country Club annual meeting last month. For those of you who couldn’t be there, I’d like to share the results of our recent election and to welcome this year’s Scottsdale Country Club Board of Directors. We have three new directors joining the board this year: JoeGirardi, John Roussel and Alan Sears who have all been elected to three-year terms.


Rich Burger will chair this year’s Finance Committee and serve as the Scottsdale Country Club Vice President. Rich and his wife Cindy have been members at the Club since 2011 and both love playing golf, and also enjoy many of the other amenities at the Club. In the past few years, Rich served on the Scottsdale Country Club Greens and Grounds Committee before joining the Board and served as its Chair this past year. Rich retired from Coleman Cable, Inc. at the end of 2013 where he was the Executive Vice President and Chief Financial Officer. Prior to joining Coleman, he was President and Chief Executive Officer of Burns Aerospace Corporation. Cindy and Rich have two daughters, and are the proud grandparents of five grandchildren, all under the age of five - four boys and one girl.


John Misner will chair our Scottsdale Country Club Membership Committee and serve as our Scottsdale Country Club Secretary. John and his wife Angela have been Golf members of the Club for 14 years. John recently retired as the President & General Manager of 12News (NBC) and 12News.com. He now works for Arizona State University having recently joined the faculty at Arizona State University's Walter Cronkite School of Journalism and Mass Communications. In this role, he also serves as a senior counselor to Arizona PBS and is also a special adviser to the Arizona State University Foundation. With this recent change in careers, John is hoping to increase his use of, Scottsdale Private Golf Courses, tennis facility, as well as the other social amenities of the Club.


Janet Pennewell, our Immediate Past President, will remain on the Board during the coming year serving as the Chair of our newly created Facilities Master Planning Committee. Janet and her husband, Larry Josephson, have been members of Scottsdale Private Golf Courses since 2006. They are active golfers and consider the Club their home away from home. Janet is entering her third year on the Board and has served the Club on multiple committees during her time here. Janet works as a realtor for Russ Lyon Sotheby’s, specializing in the local market, but also brings many years of executive level experience working with major financial institutions. Janet’s new Facilities team is challenged to develop solutions to Scottsdale Private Golf Courses   and to communicate to the membership those plans which are in the best long-term interests of the Scottsdale Private Golf Courses   As her team meets over this spring, we will be communicating their findings to all members, since by year-end we expect a membership vote needed on the expansion of those facilities.

Our new Director, Joe Girardi, will be chairing the Scottsdale Private Golf Courses  Golf & Grounds Committee which will mark the first year that the Scottsdale Private Golf Courses  Greens & Grounds and Golf Committees will be combined. The goal of this committee will be tomaintain play counts throughout the year, as well as identifying opportunites to enhance the on-course experience, at the same time expanding sustainability efforts with our agronomic approach to the course. Joe has been a member of the Club since 2013. He has served on the House Committee, as well as the ad hoc committee coordinating the recent club house and tennis facility renovations. Joe has been an attorney over the past 40 years, focusing his practice in environmental law and commercial real estate. Joe and his wife Shannon have been members of Oak Park Country Club in suburban Chicago for 25 years where he served on various committees. John Roussel has been a member of the Club since 2014. During his time at the Club, he has served on both the Finance and Tennis Committees. For 2017, John will be serving as Chair of the Tennis Committee. As an active tennis player, John is perfectly suited to chair this committee as we aim to continue growing our tennis program at the Club. John is also an active golfer and holds a single digit handicap. John and his wife, Bonnie, very much enjoy the club and the wonderful facilities and programs that are available to members. In his professional life, John serves as the Chief Operating Officer of Shamrock Foods Company. Over the years, he has served on boards of many private companies, as well as several non-profit organizations.Our third new Director, Alan Sears, will Chair the House Committee. He has been a member of the Club since 2012 and uses the Club frequently for many purposes -- for family, social, sports, and business and as an extension of their neighborhoodhome for family and friends. For the past 20+ years, Alan led a start-up legal group from a single team member based in Scottsdale to now 250+ FTE’s and 3,000+ allied lawyers in 45 nations, providing a range of legal services from strategic planning, training, funding and advocacy, including litigation and legislative support. Alan has previously served as a member of the House Committee which he will chair in 2017. Alan andhis wife, Paula, both support the golf and tennis programs and are excited about the opportunity to protect the value and the experience that is found nowhere else in the U.S. aiming to keep The Country Club at DC Ranch thriving and increasing in value and quality.

Finally, I am honored to serve as your Club President this year. Mywife, Marty, and I have been members of the Country Club since we moved to Scottsdale in 2009. We enjoy playing golf several times per week, and occasionally can be found at the pool when our four grandkids visit from Seattle. We also very much enjoy the dining and club events. I am entering my third year on the Board, having served as Chair of the Finance Committee these past two years. Serving as Vice President to Janet this past year, gave me a good appreciation for the challenges of our club. Itis because of the exceptional work of those who have served in the past, that DC Ranch is very well positioned to become the premier club in the valley, achieving the highest levels of membership satisfaction. Our new Board will focus its efforts during the next year in completing those initiatives that were identified during the development of our 2017-2022 Strategic Plan. While we identified golf as a declining sport nationally, we have agreat program under Dick Hyland’s fine leadership.

Posted by The Country Club at DC Ranch at 9:48 AM No comments: